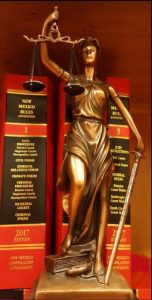 New Mexico, like the federal government and an increasing number of states in recent years, has been changing old dysfunctional practices to better protect public safety and improve the fairness of its pretrial justice system. Every jurisdiction that has seriously studied the problem has concluded that meaningful reforms in the way we distinguish between arrestees we hold in jail pretrial and those we allow to remain free until their guilt is determined at trial can be accomplished only by moving from a money-based system to an evidence-of-risk-based system of release and detention.

In the past few years, New Mexico has taken two significant steps in that direction:

(1) Passage by the New Mexico Legislature (91% in favor) and voters (87% in favor) of a constitutional amendment to give judges new authority to deny release to proven dangerous defendants – no matter how much they can pay for a bail bond – and ensuring that defendants who are neither a danger nor a flight risk may not be kept in jail before trial only because they cannot afford to buy a money bond; and

(2) Issuance in July 2017 by the Supreme Court, on recommendation of a broad-based bail reform committee, of court rules to enforce the mandates of the new constitutional amendment, better protect public safety, and improve equal protection of the law. Learn More

Key Facts and Law Regarding Pretrial Release and Detention